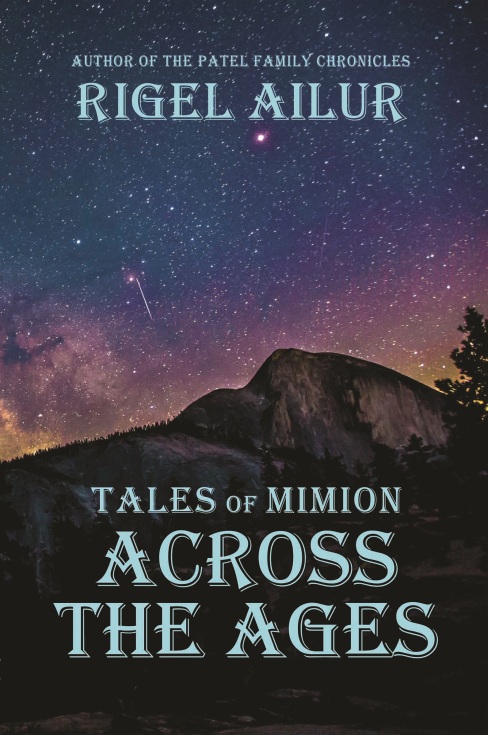 From Mimion’s earliest history to its space age, these stories show moments large and small that contributed to how the culture evolved.

Ilyn
One newly-departed spirit of a gigantic cat.  Two souls still very much alive, yet completely lost and adrift.  The feline ghost wants desperately to help them both if only they’ll let him.

Lefgree
Huge fish, not just intelligent but telepathic—and a commodity to slavers who abduct the fish’s children.  The abductions threaten to derail the whole world’s attempt to embrace its future instead of wallowing in the past.

Teeren
Primitive nomads, medieval castles and interstellar spaceships.  They all mingle on the planet Mimion, where telepathy determines social status.  Two scientists from Earth enjoyed their visit, just not enough to want to be trapped there forever.  Separated in a crash, they fight to find each other, then find their way home.

Zix
The dilemma:  abandon the past to save the future?  Leaders plead with their tribe to flee rather than fight a tsunami of settlers surging toward their lands.

Swirland
A raging tornado threatens the evacuation of a medical complex, leaving a rescue pilot no choice but to fly directly through the heart of the twister.

De’Ona
The rules of the game: ‘kidnap’ the groom—not kill the bride.  So much for a fun, harmless tradition.  The bride’s first order of business:  escape her pursuers and stay alive.  The second:  get home and find the killer.

Azencer
Two sisters battle over the fate of the queendom.

This site uses Akismet to reduce spam. Learn how your comment data is processed.